“In the mid-1970’s, due to a normal teenage interest in alcoholic beverages, my family allowed me to make some wine from the family vineyard and beer at home (under adult supervision, of course).

This led to a UC Davis degree as well as concurrent work at a local winery doing the dirtiest and most menial jobs imaginable. In the mid-1980’s good friends at Duxoup Wine Works (think Marx Brothers for the pronunciation) inspired me to try my hand at my own label so I negotiated cellar space in lieu of a raise by my then-current employer, Greenwood Ridge Vineyards in Anderson Valley (I got a raise anyway). Greenwood Ridge was supportive of my project and decided to have some Scherrer Zinfandel produced for their label as well. Unfortunately, I had a poor business plan and during the first year I realized I was not yet ready for this project. Greenwood Ridge continued to make a small amount of Scherrer Vineyard Zinfandel for many years.

Enter Dehlinger Winery in the late 1980’s. Tom Dehlinger was very supportive of my long-term plans and challenged me to develop a solid business plan, facilitating an important entry into my own project. In return, his winery received my heart and soul for a decade. The final key element in our getting started was from my parents. They allowed me to delay paying them for their fine grapes until we began getting cash flow from our wine sales. By 1997, we were ready to make the move to a facility of our own. In anticipation of this, we were able to add Cabernet Sauvignon and Chardonnay to supplement the Zinfandel we were producing, all from my father’s vineyard in Alexander Valley. Tom Dehlinger supported this transition of my focus, allowing me to produce these additional wines in his facility and we parted very amicably after that vintage. 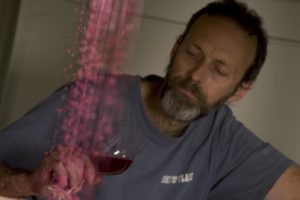 And so after the harvest of 1997, I moved our operation to a corner of an apple packing shed-turned-winery, finally leasing the entire building. During this period, our production grew from just the three varietals from Scherrer Vineyard, to now typically a dozen wines, about half of which are Pinot Noir. Total production is now about 3000 cases. My good friend, Don Bliss helped me whenever I needed a hand (or a finger to dial 911 in the unlikely event of a forklift mistake) during the first years until he sold his fine vineyard and moved back to his native Texas in 2006. Since then, I have been able to impose on a handful of friends and local customers when I have needed help, but still continue to work at the winery pretty much alone most of the year. Judi, my wife, has handled administrative and compliance for the winery since 2002, keeping me out of trouble with bureaucrats and making sure we are able to conform with the complex and changing world of direct shipping and wholesaling laws, reports and fees.”